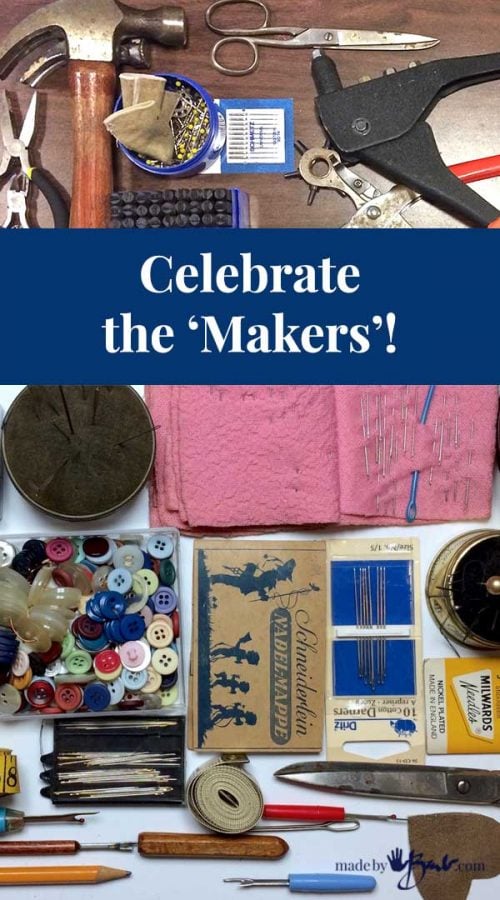 It is almost Christmas and I am finally sitting in my chair…completely and absolutely exhausted. I thought I had everything all planned and organized but for some strange reason ‘time’ seems to have sped up and I am running short to finish it all. Alright, I know, I am really responsible for my own demise, since I tend to get carried away by making so many things, gifts and other things like food.

After threatening myself to never ‘make’ gifts again I realized something very important; we would all be much worse off if not for all the ‘Makers’!!!

I dedicate this post to all ‘Makers’ out there and some very very special ones in my life.

(Don’t worry, that threat only lasts only about as long as I can think it.) 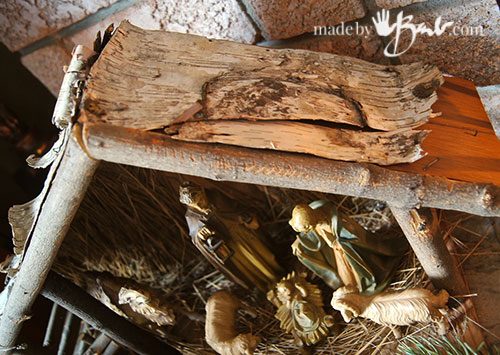 Why are we ‘makers’? Probably and possibly the most common reason is that you have been shown that ‘making’ is good for so many reasons. That was the case for me. My parents lived in unfortunate war-times where ‘making’ was  necessity. Nowadays that is rarely the case but should be for some.

Sometimes it was to create an heirloom piece from found and collected objects. Such was the case with this Nativity set that my father built. It was special enough to warrant the move from Germany to Canada and now has a special place in my home and my heart.

I have inherited so much stuff that most think has no value, but to my parents it meant more. Buttons were taken off clothes, zippers taken out, fabric reworked. I bet I have the most unique button collection with some that may have actually come from soldiers’ jackets. 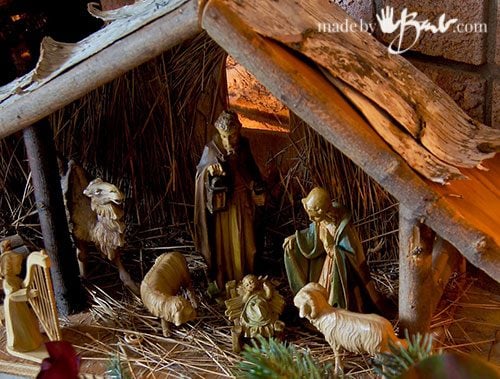 My father had quite the skills with his hands but carpentry was not one of them. However he was a wiz with the straight razor and barber scissors, so for that reason I marvel at how he built this manger himself. I chuckle at the bent nails but can’t love it any less. 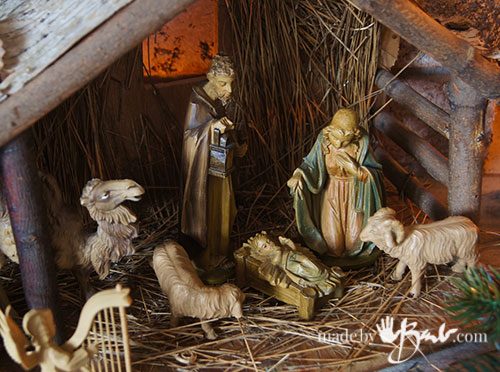 Some straw goes missing each year and the one sheep has a missing leg since I would rearrange it all the time as a child. Due to the details it may seem larger than it really is as it is only about 18″ wide. Made of thin plywood and scavenged branches it has so much charm and character. 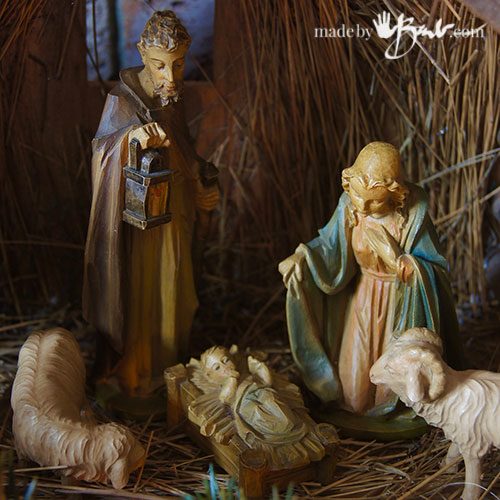 The Mind of a Child

As a young child I marvelled at the carving details and might have been thinking that some day I would be able to make such beautiful things. It goes to show you that we really should be aware of what we show our children. Children absorb what they see. Often I ask myself why I seem to make my life difficult by hand-making things. But when I see how my son or daughter take the initiative to create something it is all worthwhile.

Think back to some of the major events that shaped your life. It seems so clear now why I make what I make and why I long to be creative. On a recent trip back to Germany I was told that I had descendants that were blacksmiths, gardeners, hairstylists, as well as pastry chefs. Is it any wonder?! 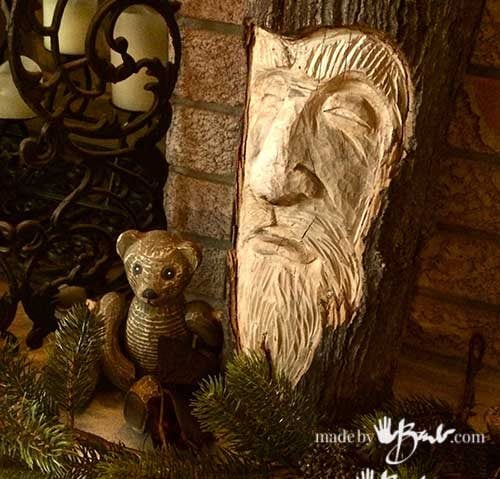 I have a somewhat rustic style and the tangible texture of wood is so appealing. I even have my own chainsaw for carving with, but that’s a whole other story… I guess it all stems from the carved Mary and Joseph. 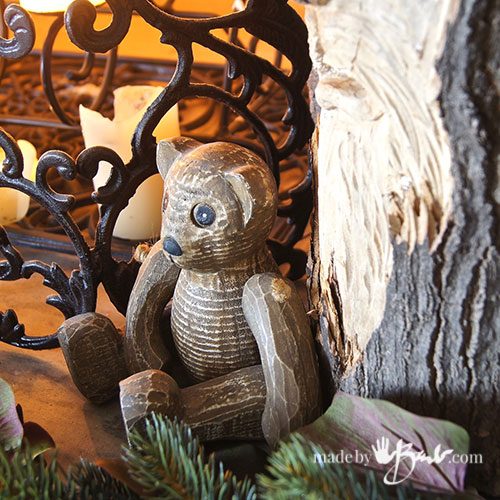 Why do ‘makers’ make? Often it is to create a gift; one that has much more meaning than a factory made one. I have been gift-making since my parents realized that I could draw and paint. Most of my relatives have a stockpile of my works from many years of birthdays and christmases.

It has become a standing joke in my family that ‘I will make people cry’. Some of the gifts have been so special and meaningful that it brings out such emotion. That’s probably why I can’t bring myself to just ‘buy’ gifts.

Now I also get commissioned to make gifts for others to give… so they can also make people cry! No wonder I am starting to not doze off…zzz… 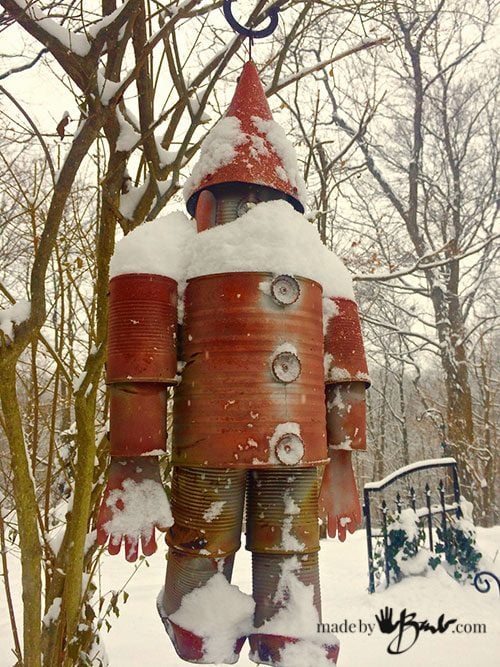 I believe if there was more ‘making’ in the world there would be less depression as so many good feelings come from the accomplishments made.

You may not know  but my other job is teaching young adults in a large art college. I strive to inspire them, excite them to have passion for their chosen art form or media. I want to see that sparkle in their eyes! Not an easy task as most are very critical of themselves. Most days I feel more like a coach and a cheer leader.

My motto is; everyone is creative in some way, the hard part is figuring out where and how to harness it!

I wish all my readers a great Holiday season! And can’t wait to share some more creativity with you in the New Year! I hope all your handmade gifts receive much acclaim and you also make people cry…

25 Projects made with LEAVES!

One of my missions for this stage of my life is to give back; to…