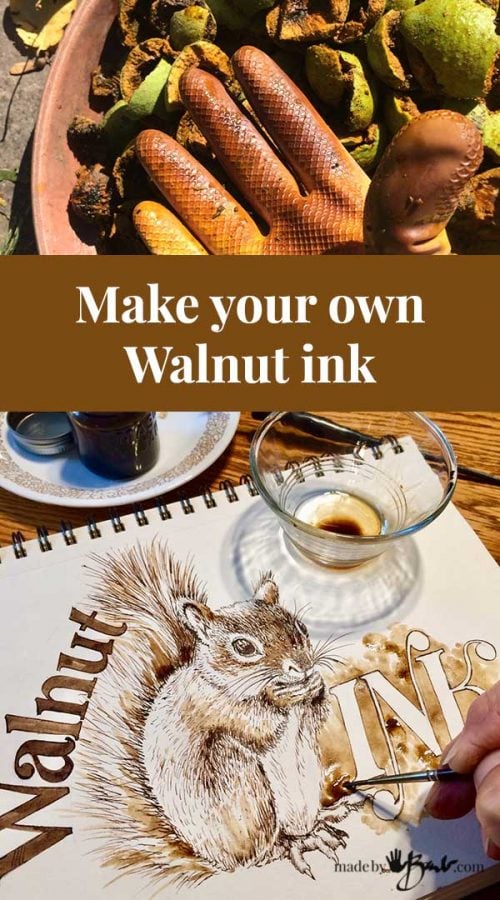 It’s time! They are falling all over the place! It’s walnut season here and they have been quite plentiful! I’ve jumped head first into natural dyeing so making ink from something that was going to rot anyways seemed quite logical, especially for an artist. Make your own Walnut Ink with one of these methods; a lot or a little, or give it as gifts. I have even made a label (free download) for you… using walnut ink of course. 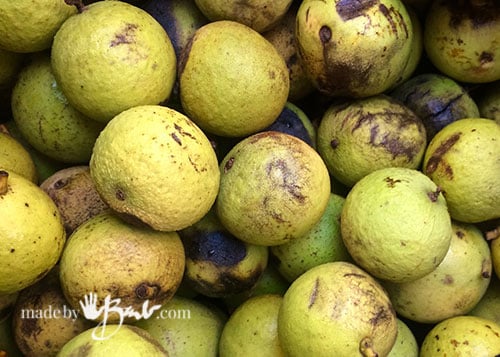 Black walnuts have been a staple in the making of ink for centuries. I am not sure which exact species I was finding but they will all work quite nicely. 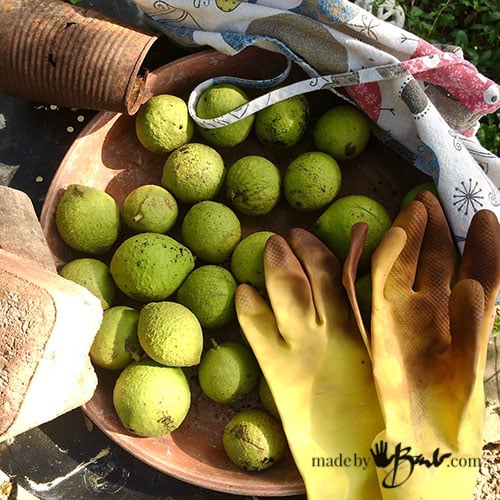 Collect walnuts; as many as you can find. Even the black ones will work if you can get over the little worms often found inside. Be warned though; these little nuts have quite the ability to stain, skin, clothes, patios, driveways… Double gloves and an apron are a must. Don’t tell me I didn’t warn you… 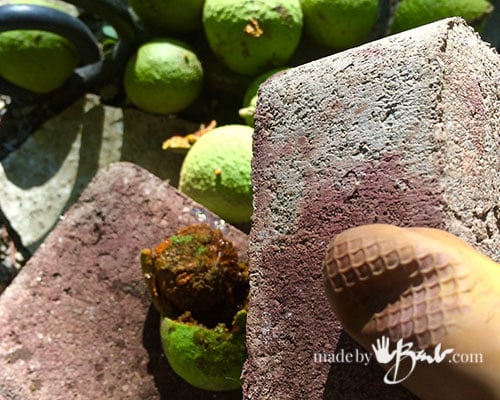 I use what ever I can find to smack the outside of the walnut to peel the outer green layer off. (rock, hammer, brick…) It will start to oxidize and turn dark.

Walnuts pack quite the punch of golden-brown colour dye called juglone. They also have tannins.

Here are 2 methods, each a bit different;

Make your own Walnut Ink – Method #1

For this first bacth; after removing and collecting the outer green layer add enough water to the shells and put in a large pot. You can let them sit for a few days before cooking to help oxidize the shells but I found that you will yield a darker brown ink. They will however attract fruit flies and start to ferment. I brought it to a boil & cooked it outside on the barbecue side-burner. 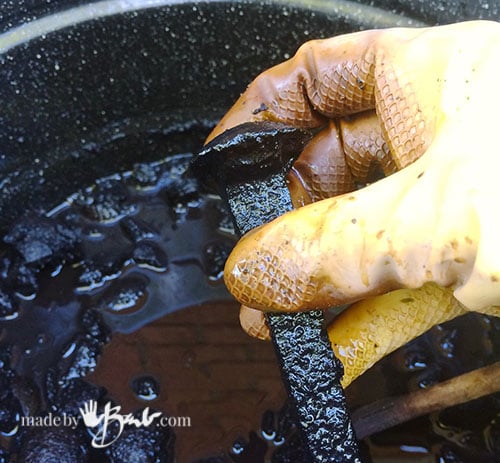 If you want an even darker ink you can add some iron or rusty steel into the liquid. I added an old railroad spike. 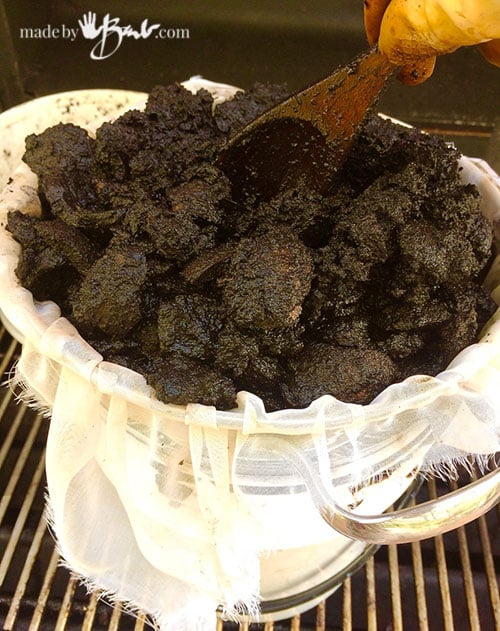 This method is quite messy as after cooking for a couple hours you will need to strain the large chunks of hulls out. You will need some utensils to scoop out the mushy stuff.

Set a colander/strainer over a bucket and use some fabric (old curtain, cheesecloth or similar) to strain/sieve the dye. Choose the strength and consistency of the ink according to your preference. Test it with a brush on paper to see if you need to cook it down more. I like to strain it a couple times with a fine sheer organza or even a ‘nut bag’.

(Do not dispose of the leftover black hulls in your garden as they contain material that inhibits growth.) 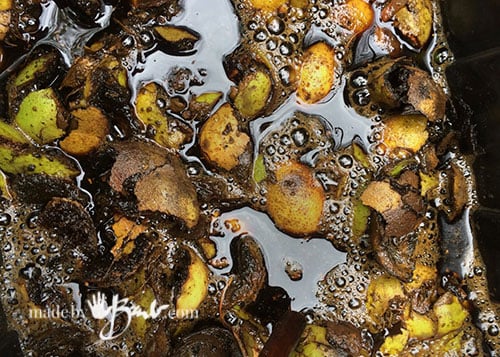 Make your own Walnut Ink – Method #2

Since I kept finding more walnuts, I kept making more batches. The second time I decided to fast-track somewhat to have less mess.

After soaking the shelled green hulls well in water for a day, I strained out the walnut husks before cooking. I used the old curtain fabric and also squeezed the extra water from the hulls by twisting the bundle. (don’t forget the rubber gloves!) I did that all outside and then brought the ‘juice’ inside to cook. 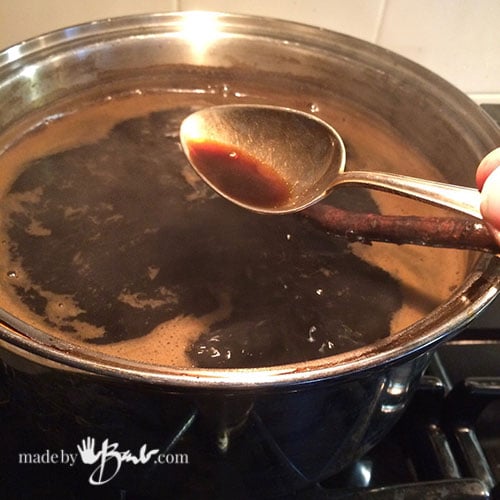 Such lovely golden colour since the hulls were still quite green. For dyeing wool and silk the less oxidized hulls produce a nicer rich brown. There are many options of utilizing these gems for the process of dyeing including freezing for later use.

It only took a couple hours to cook this black walnut ink to a fraction of the amount.

The sheer organza strains it quite well and it is easier since there is not any mushy black stuff. 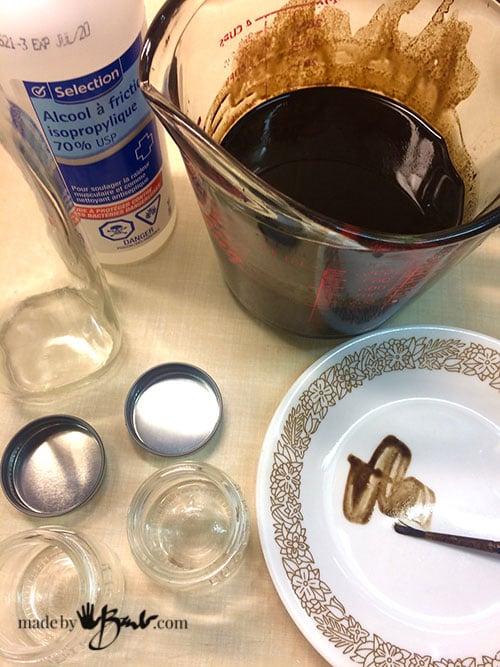 When you think you have it cooked enough, test it. There will still be some solids in the ink, but you will get an idea of the colour and consistency. 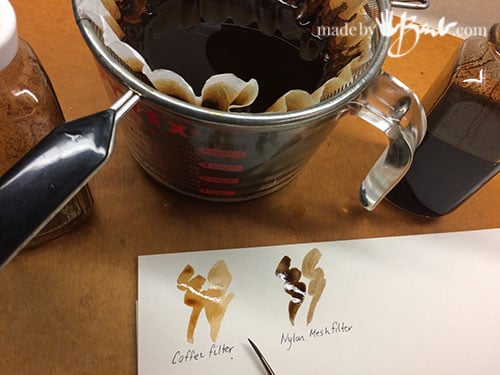 If you want a completely strained ink, you can also try a coffee filter. Since it is so fine it did however take too much of the ‘body’ (dark brown) out of the ink. And it quickly clogged the filter. See the difference of the 2 above.

I decided to stay with the mesh filter, and if I wanted the thinner ink version, I would just not shake it prior to using. 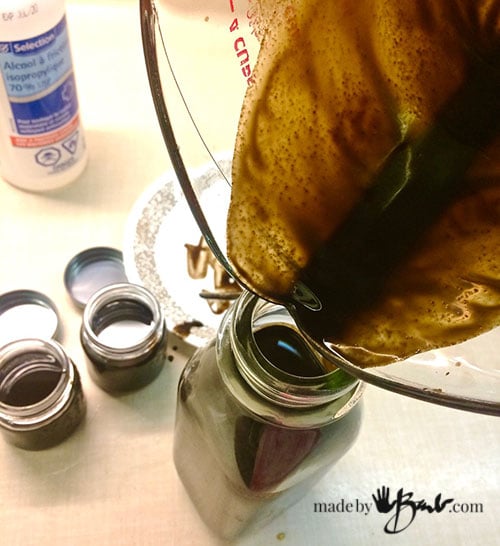 As a way to preserve the ink from growing ‘nasties’ (mold) add some rubbing alcohol (about 5%) Use some well sealing bottles to decant. Less air in the bottle also inhibits mould growth.

As an aid for flow, you may add some gum arabic or some xantham gum as a thickener. I was completely happy with how it was without it; such a beautiful golden brown. 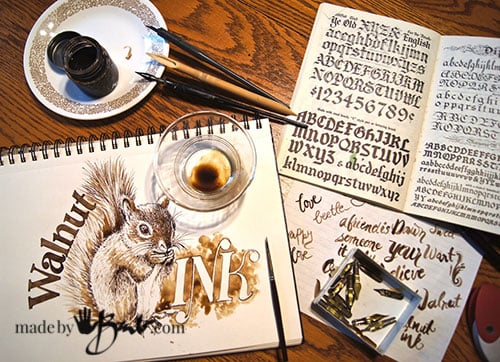 This ink (both versions were used here) works great with a brush or with dip pen nibs. I do think it is too thick for a fountain pen however. I am looking forward to using it for some good old-fashioned calligraphy! 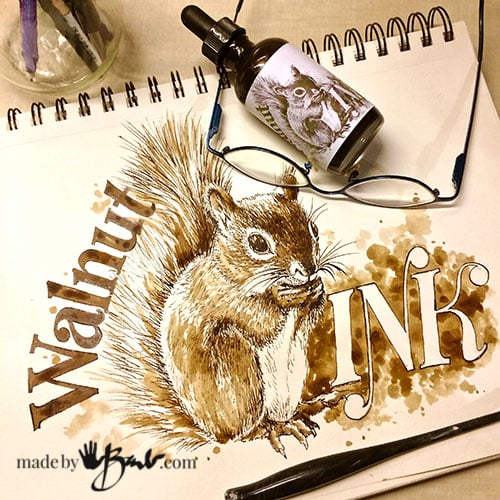 As a bonus you may download my label design to print, find jars and make your own unique gifts… Enjoy!