Don’t you hate spending lots of money on planter arrangements that get tossed soon after the holidays?! Yes, I knew there was some reason I made so many concrete orbs! As I stood in the kitchen and looked out over the garden this Winter Planter Snowman DIY idea popped into my head. Why not use your concrete orbs as planter decoration?! Super easy and nothing gets thrown away… 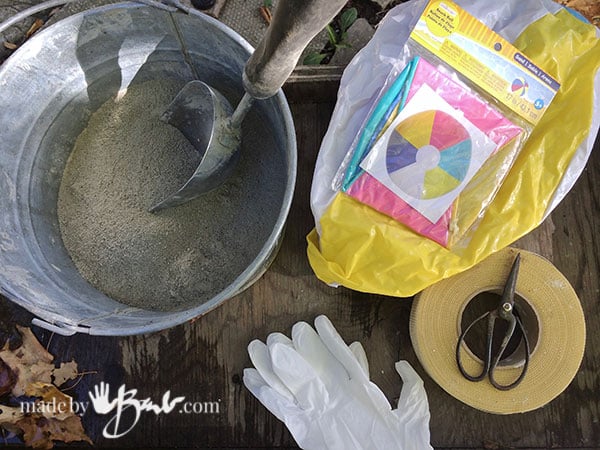 First you need to make the orbs. I’ve made them before in this tutorial but slightly revised the material in this one. 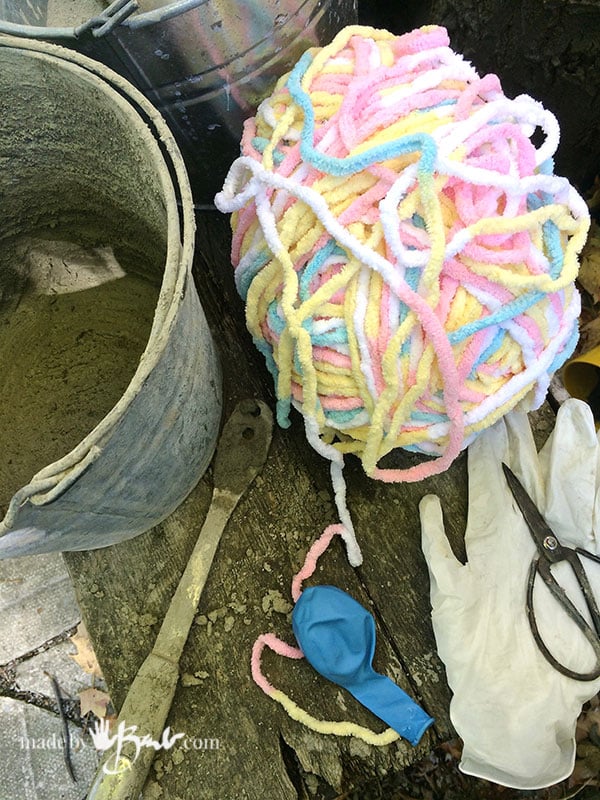 Blow up the balloons or balls. I used beach balls for the larger ones and balloons for the smaller ones. You will need some bowls or something that they can rest on when setting/drying. 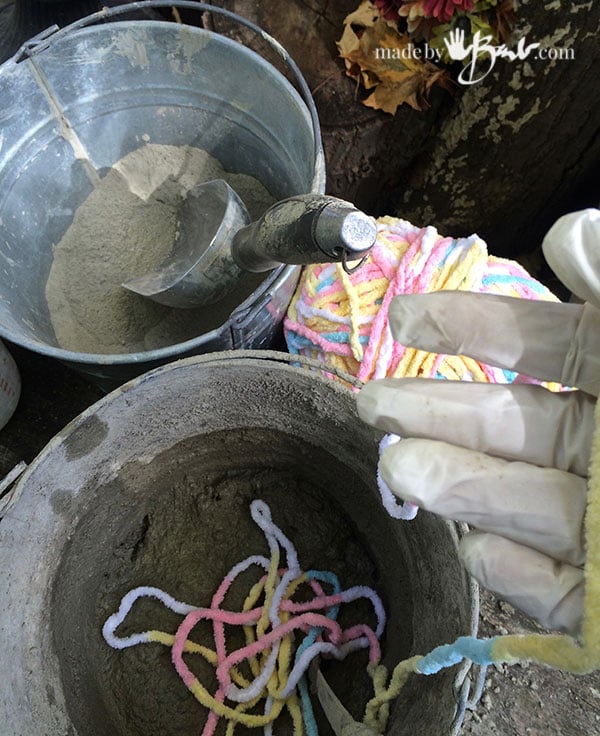 Mix up a thin mix of portland cement with water. It will need to be on the runnier side, like a slurry. Unwrap a bunch of yarn that is enough to wrap the sphere about 25 times. Don’t worry, you can add more later if not enough. NOTE: don’t lose the cut end in the bucket! It’s impossible to find (ask me how I know)

The colour of the yarn doesn’t matter, as it will (should)be covered completely. 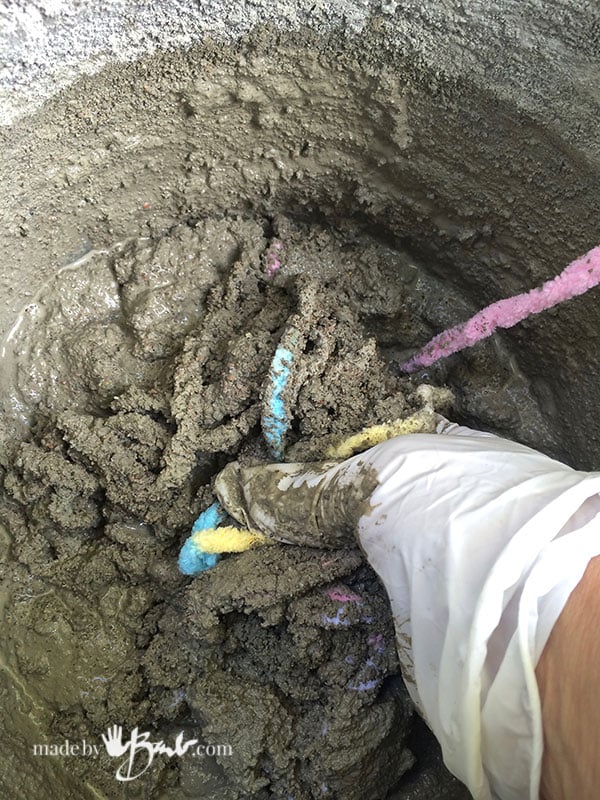 Drop it in to the slurry and knead it well. The cement needs to get into the fibres quite well. The yarn tends to suck up all the moisture, adjust accordingly by adding a smidge of water. Once it’s well covered, pull the yarn out and wrap around the ball. It can be hard to start it, wrap the end around itself once it has one full wrap, and then keep wrapping. It is similar to winding a ball of yarn or string. 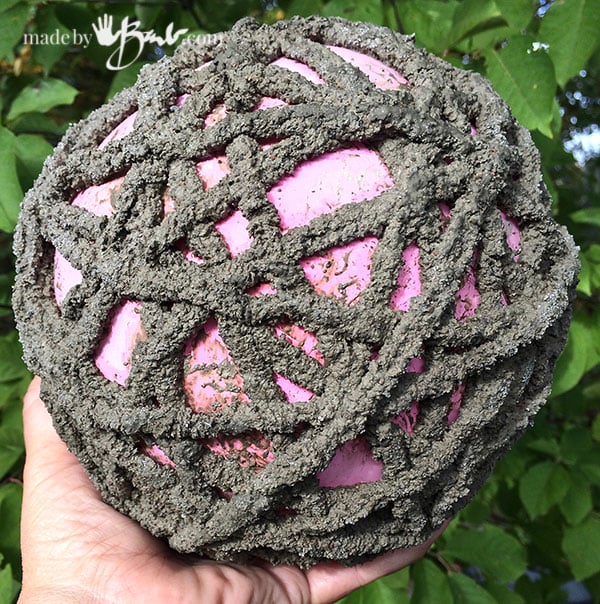 Sorry, no process picture as it takes all (three) of my hands to wrap and hold the ball. My bad, I should have a glove on. (Must have taken it off for picture taking) 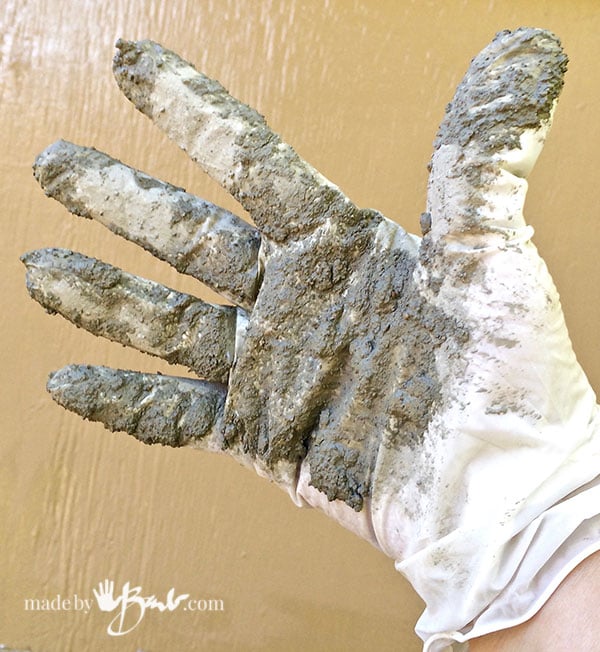 I do wear gloves, honestly. 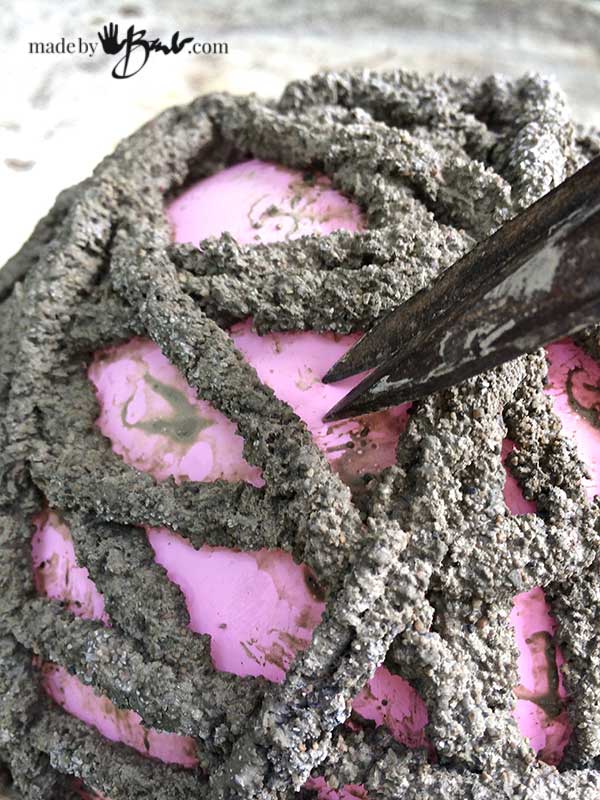 Let them cure for at least 24 hours. Here is a closeup. It is quite strong if you made sure the cement got into the fibres. If need be, you could do another wrapping if you feel it is too sparse or too soft. I don’t imaging that anyone will be stomping on them anyways…. Poke the balloon, or deflate the beach ball and pull it out of the largest ‘hole’ section. 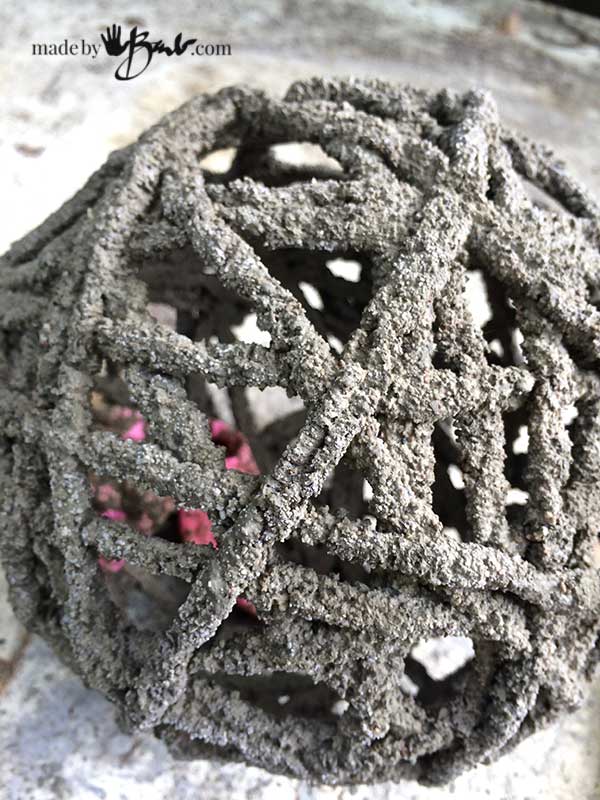 There you go, pretty awesome. 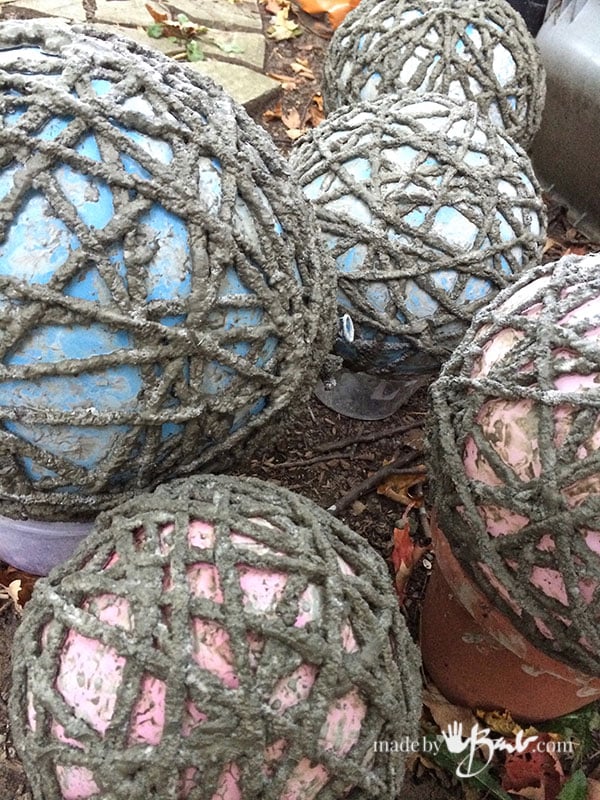 I made a few while I was at it. I knew I would get some idea… 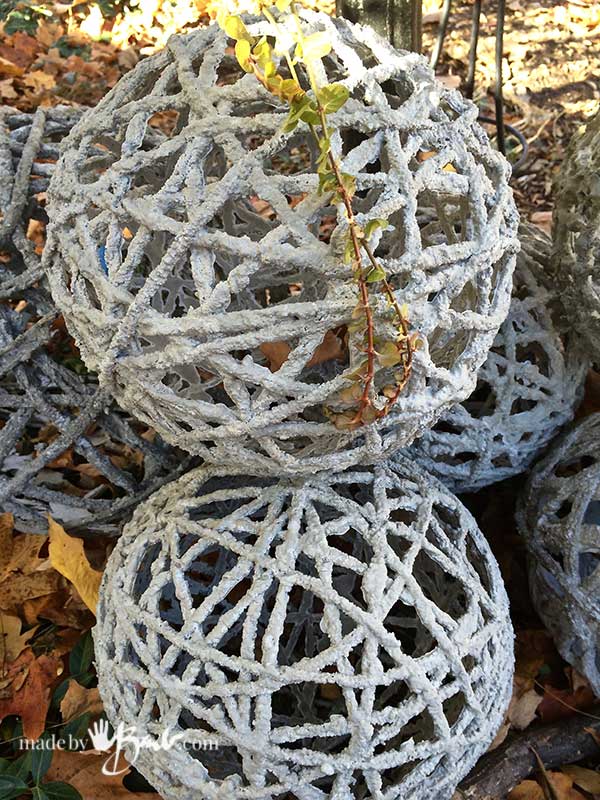 Cleaned out and cured. 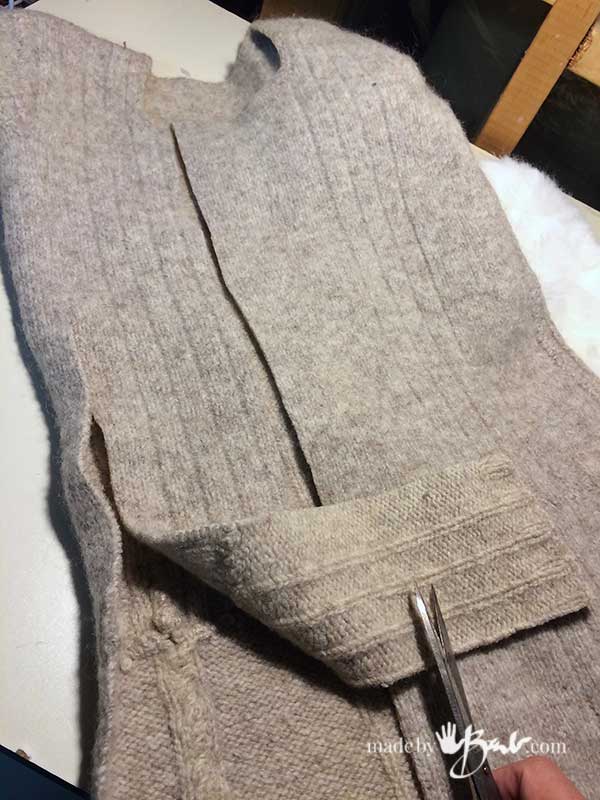 Well, Mr Snowman needed some accessories. I checked what I had kicking around and found a sweater that had been shrunken. You could use whatever you like, even some of the kids’ old hats and mitts. I liked the rustic neutral colour of the sweater and since it was pretty well felted, it cut without unravelling. I cut strips up the front and over the shoulder to the back for the ‘scarves’ 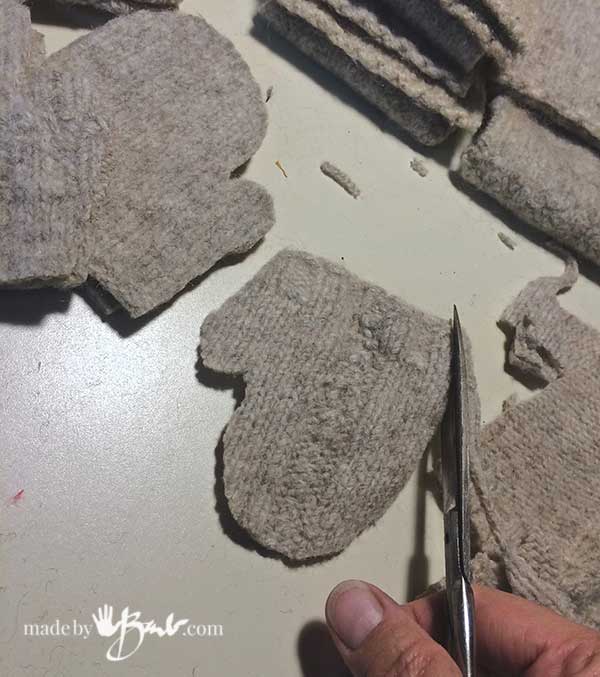 For mittens I cut out some simple shapes. 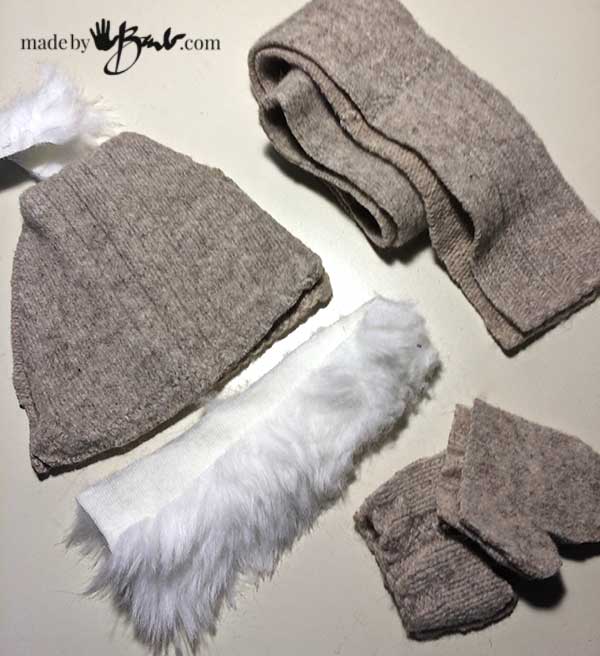 With the leftover, I squeezed out some triangle shapes for a hat. I edged it with some fun-fur, but you could use accenting fabric. 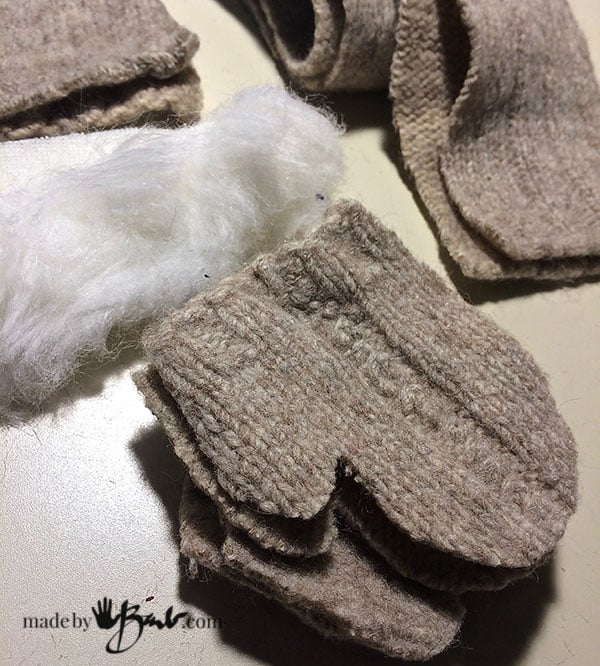 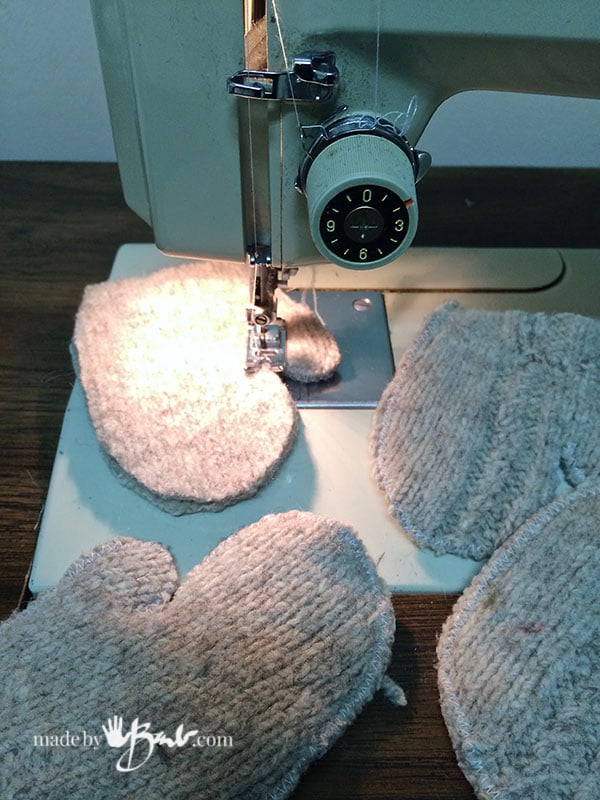 Feel free to glue if you like. I ‘zigzagged’ around the outside very simply. 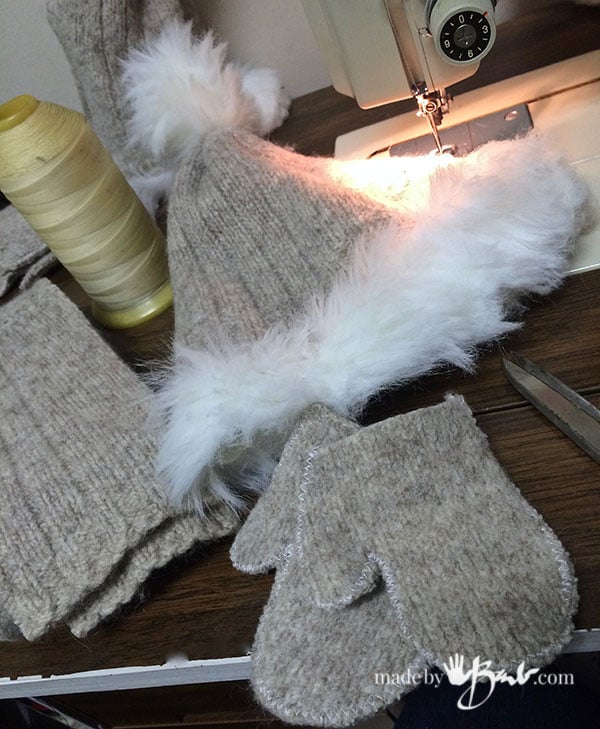 Don’t fuss too much. It is going outside after all. 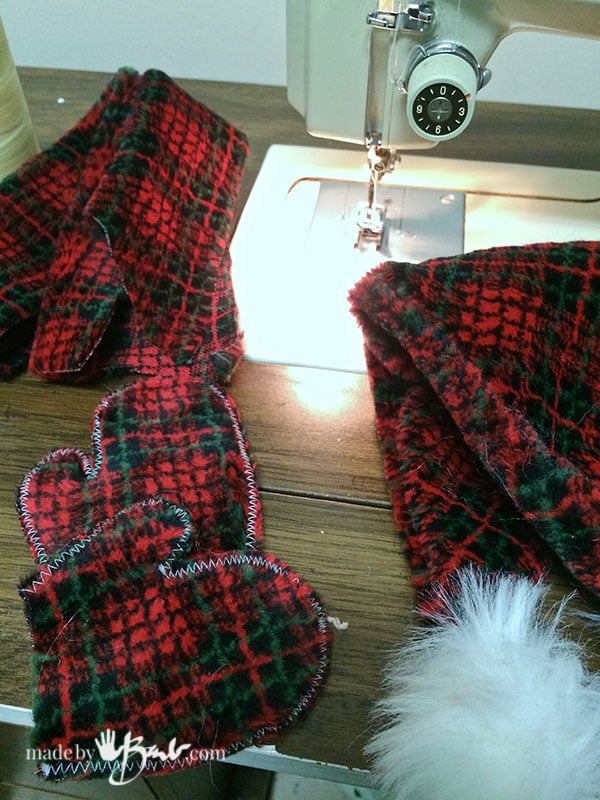 As usual, I get carried away and just HAD to use some of this for one of the little guys. (I did make enough for three snowmen) 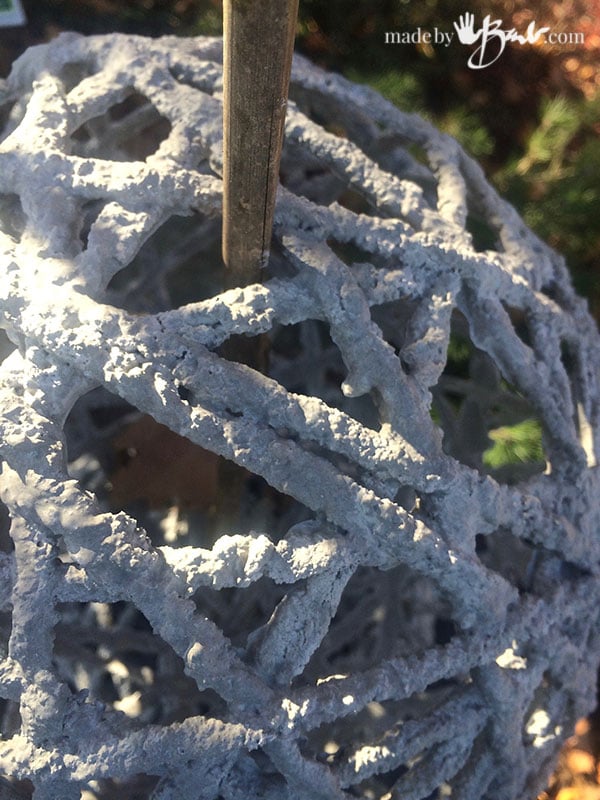 Time to assemble. Gather your orbs and some type of stake or stick. The stick will hold the balls by skewering through them (like shish-kabob). The urn can have soil or not. Mine did not so the balls nestled in. I shoved some greenery (also reused) around under the balls. 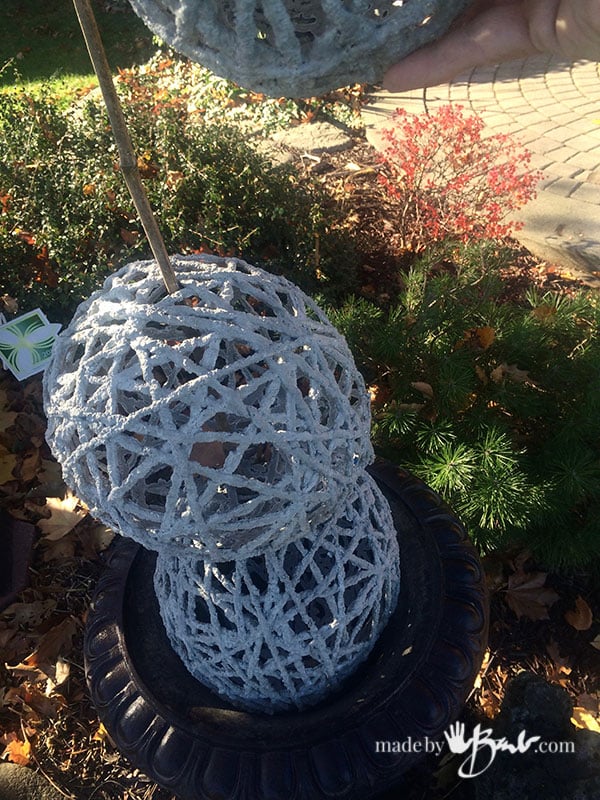 Manipulate the balls to find holes that fit the stick. It can be 2 or 3 balls snowman. 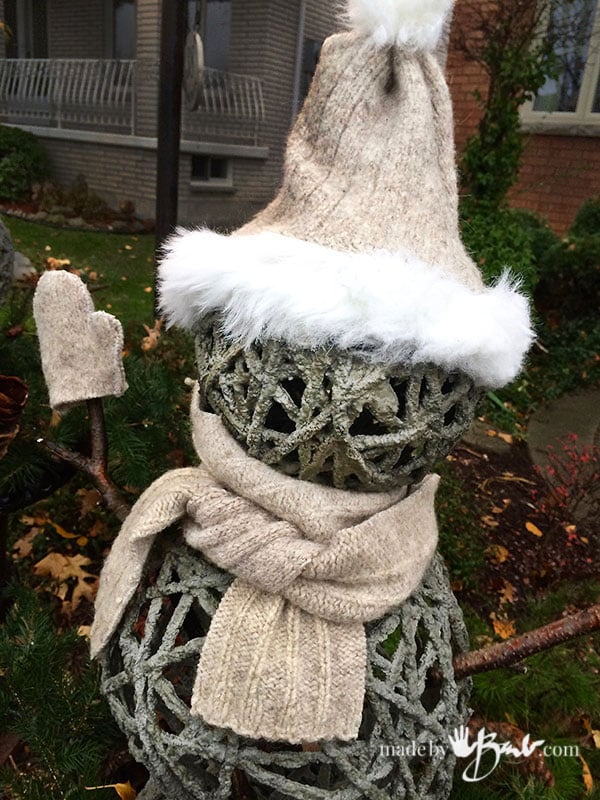 Go find some branches that will be his arms. Skewer them through as well. He’s cold, so put his hat and scarf on. 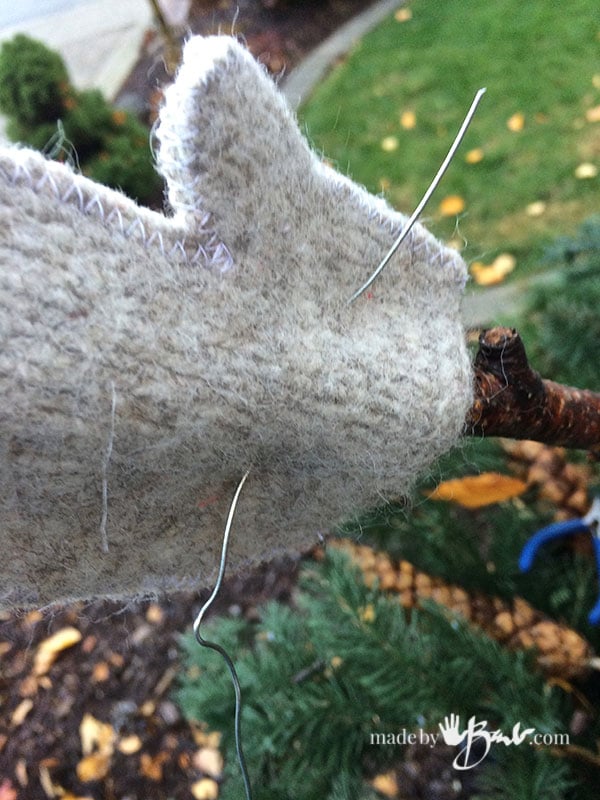 In order that he doesn’t lose his mitts, I used a bit of thin wired threaded through from the back. 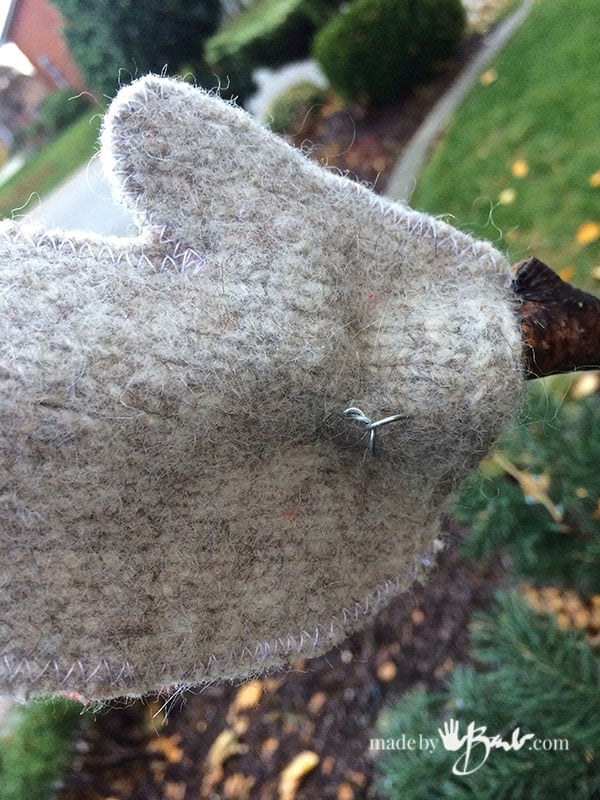 Twist it tight as it is catching the branch.

Here is the little guy in red. 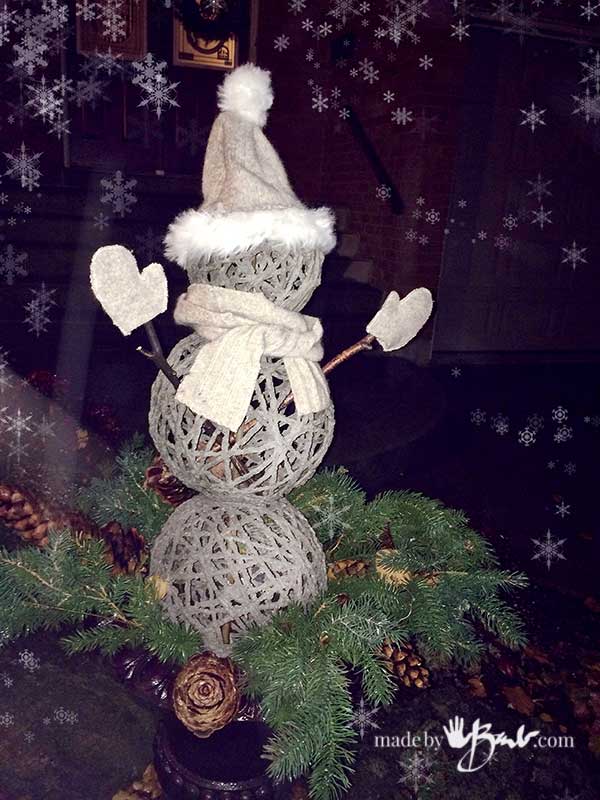 Set up a spot light or even push some lights into the orbs. So unique and the snow won’t affect the concrete. Once spring comes you can use them in the garden agains so there is no waste! Alright, add a carrot nose if you insist! 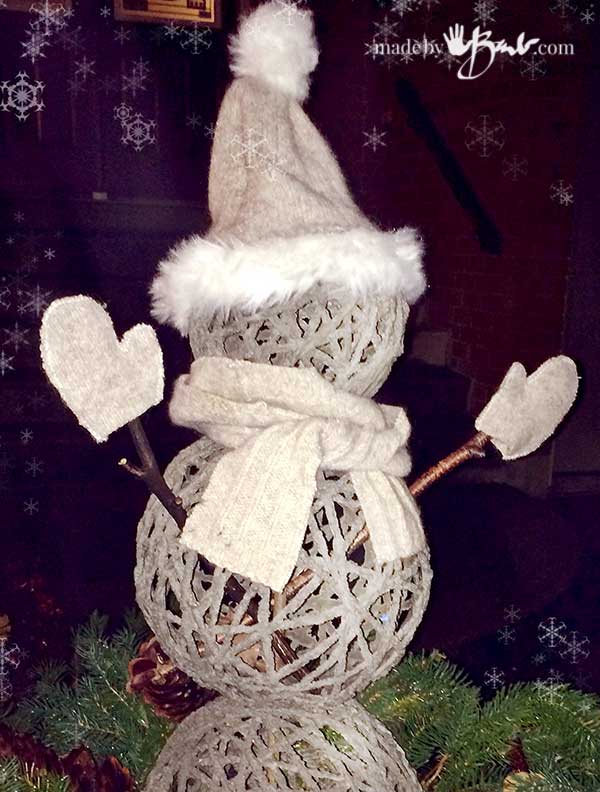