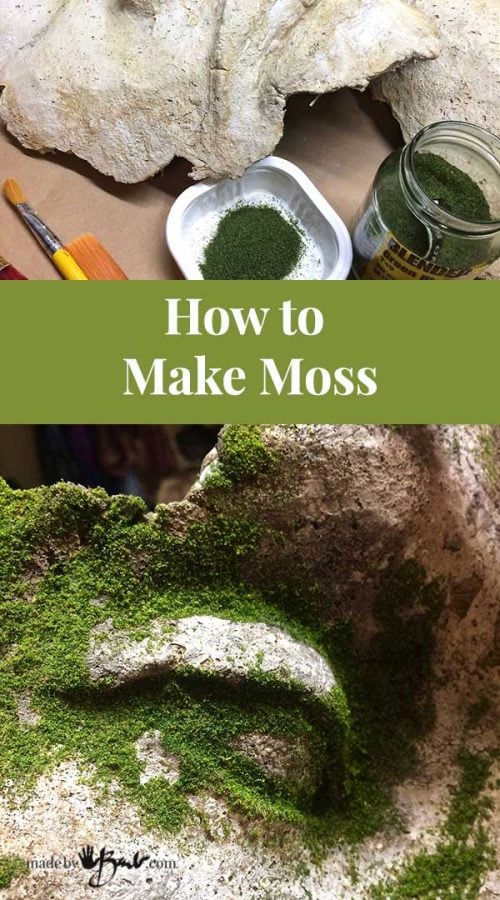 Alright let me tell you; I have quite the history with moss! I have been dealing with this little green stuff (not the better green stuff) at my shady place for many many years. So, when I wanted some moss on my concrete I thought it was a no-brainer… Well, check out my interesting moss adventure so you too can figure out how to make moss. 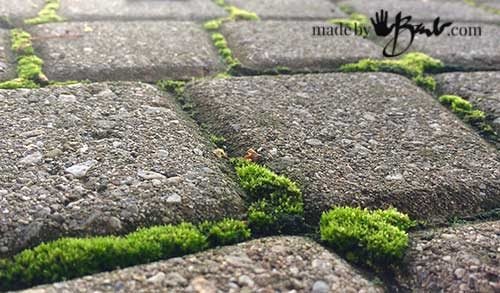 Green stuff growing between my interlock pavers has been a bit of an issue. I don’t like weeds or other little plants there, but ‘nice’ moss is another story. But whether moss or other things grows depends a lot on many variables. It also depends on the material that it is growing on. For some strange reason this year all the factors came together and I had some really nice little fuzzy green moss take hold. So, I decided I would make some moss of my own grow on my rustic Concrete Masks. 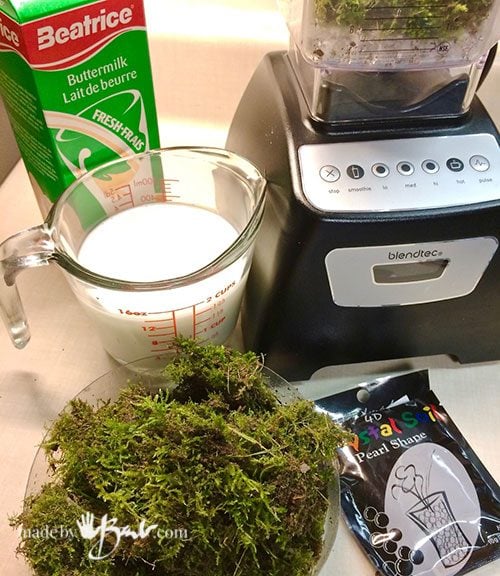 Supplies to Grow your own Moss

I collected a good amount of green moss from the forest. As a precaution I collected a few varieties. Moss is quite resilient as it can come alive even after drying out.

Soak the ‘water beads’ until they become engorged with water and clear. This material will give the moss a constant supply of moisture. 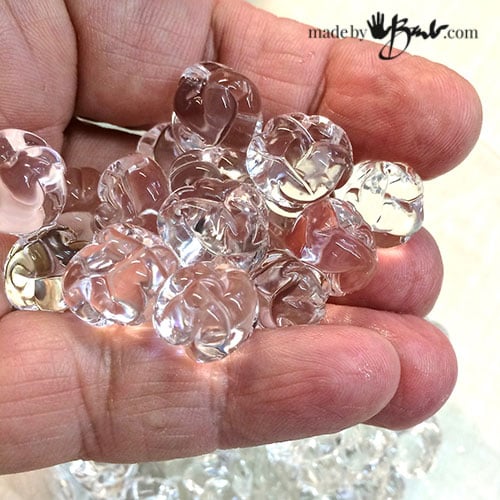 Add a handfull of moss to the blender, about 3/4 cup of buttermilk and 3/4 cup or so of the water beads. 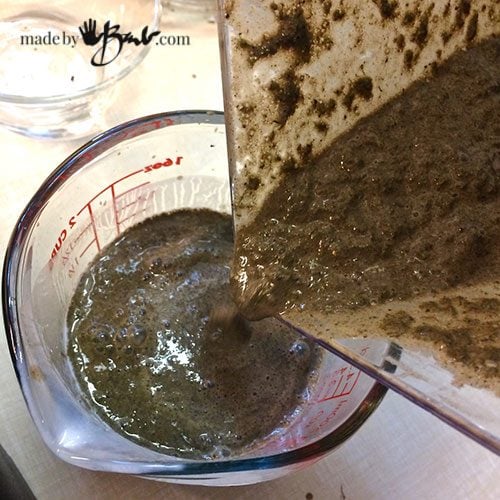 Blend until it is a somewhat smooth slurry. Add more milk if it won’t blend. The colour is somewhat brownish due to the soil from the moss. But moss is not picky, as I see it grows in the most odd places.

I cleaned the Concrete Face quite well and then painted on the ‘moss mix’ I chose areas that would seem natural to grow like the bottom and sides and in crevices.

Then I placed it in a shady spot, even gave it some protection form constantly drying out. That’s the thing about moss; it only grows when it feels like it; when all the elements are exactly right. I misted it and kept it damp. I waited, and waited and waited. It was summer, moss was growing in other parts of my place, but not on it. I even put some of the mix in between the flagstone and saw no action there either! It is not an easy thing to keep it damp either as it can dry out in no time during a hot summer.

If you research ‘moss growing’ you will be shown how it ‘can’ grow on a wall in the shape of letters… Really!? I highly doubt it. I have moss growing all over the place due to the shade and amount of rain we had, but no, not any on my concrete. I would have to get a degree in chemistry and botany to figure out why not… Maybe the concrete has some residual material/PH that the moss does not like. We see moss grow on statues, but after many years. Much to my dismay it grow where it wants, not where I want. 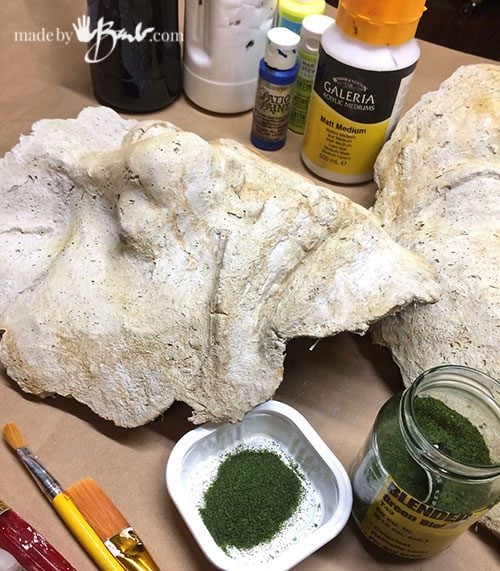 So, I took matters in my own hands (yup, a control freak) and MADE moss. That will ensure me the moss that I want and where I want it!

Supplies to Make your own Moss 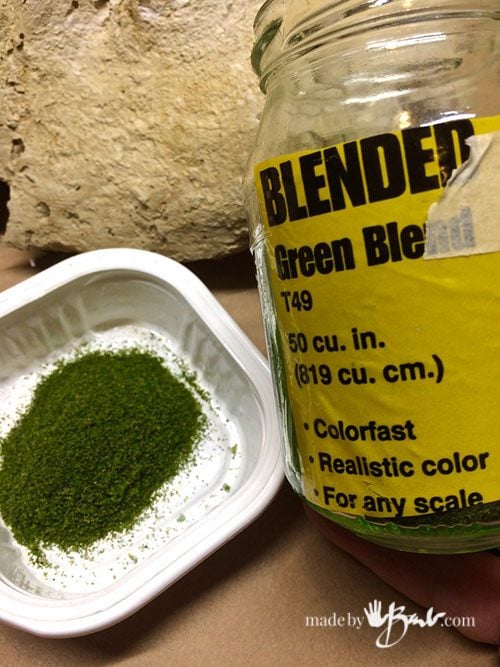 As you may know now, I have a lot of ‘making’ in my history; some of which was teaching architectural model building. It was quite fascinating and tedious to make not just those cute miniature buildings with all the details but also the amazing little trees and landscaping that looked so realistic. And being a true artist I keep ALL media, as you never know when you need it… Voila turf flocking fibre. It is amazing stuff, keeps it great realistic colour and can be used for many things. (can be found at Hobby and Model Train Shops) 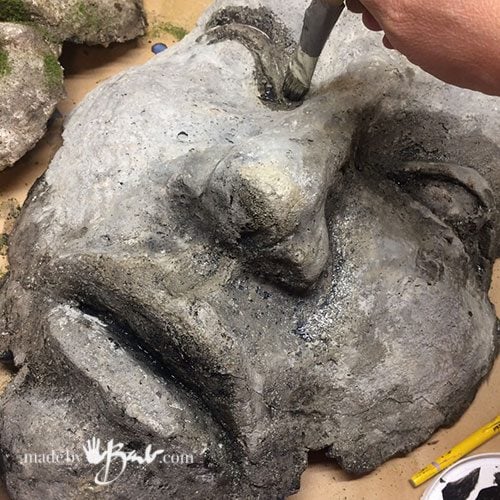 Prior to adding the ‘moss’ you may choose to give your concrete some ‘age’. If you look at some old statues you will see how they develop dark areas, and not always just black, but also greenish or brownish. As in my tutorial for aging I use watery washes of acrylic paint (black, white and other colour mixes) so that it sinks into the porous concrete. I don’t want it just sitting on the surface as then it will probably peel off over time, as many of the ‘topical’ finishes do. 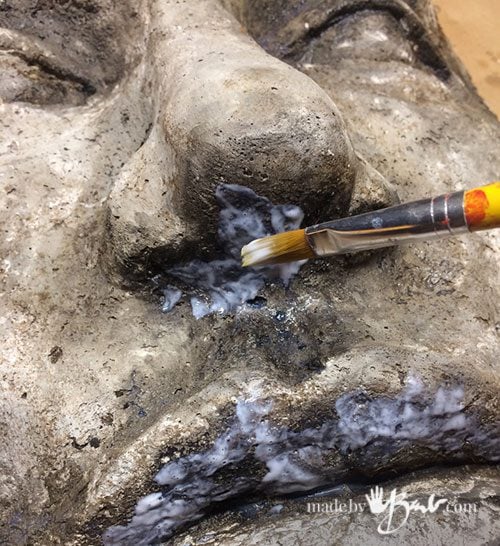 To adhere the moss flocking is similar to working with glitter. Instead of a glue that may soften when wet I use acrylic Matte Medium as that is waterproof when dry. Dab on areas where moss would likely grow thick enough to allow the flocking to imbed into. Moss usually grows where the sun does not hit, undersides, crevices etc. You can build up areas if you choose. 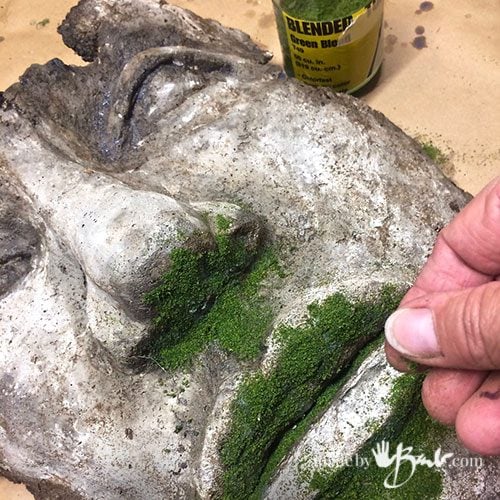 Sprinkle the flocking onto the areas of medium. Any extra can be salvaged after it dries if you have it on a large paper or plastic sheet. I sweep up the material that did not adhere and I seem to get a lot of coverage with it.

Do let it dry thoroughly and then use a soft brush to gently sweep away what ever did not adhere.  It is key that it is completely dry. If you did not know better you would think it was real!? 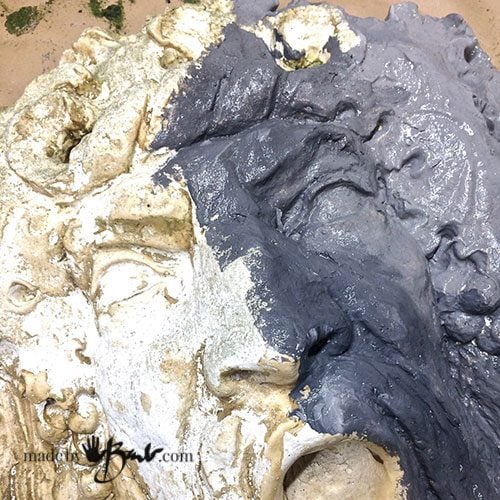 This technique can work with anything that you want to look like old mossy concrete. I gave this plaster artifact the faux concrete finish first. 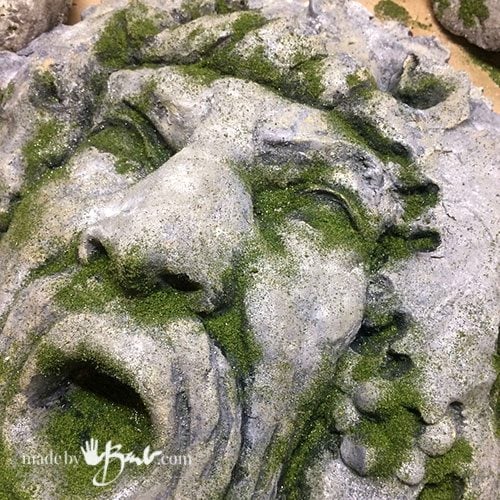 And then added the moss the same way. You really can’t go wrong. Sometimes I even surprise myself… 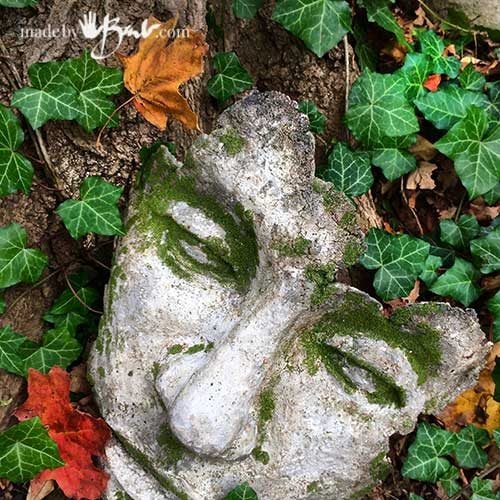 The colour is quite nice with the garden green as it is a blended mix of fibres. Will it last? 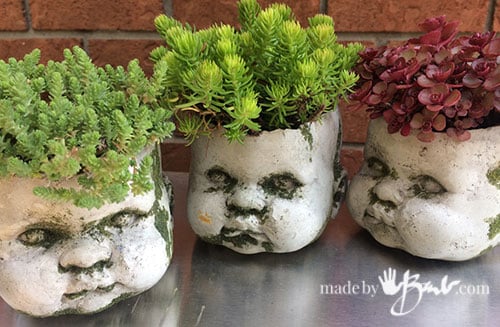 I have had these heads out in the elements for a year and they are still holding their moss quite nicely. It is a great way of adding some accent detail without adding crazy colours to concrete. I don’t think you will be disappointed! ‘Moss on’!

Concrete Basics FAQ’s – Why did it crack?

You'd never believe how some of these crazy ideas 'hatch'! Everyone is allowed some silliness…